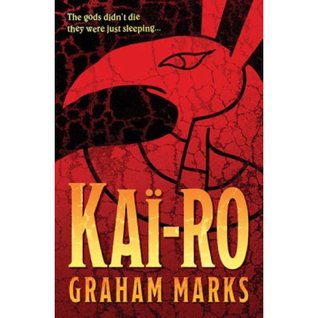 
This book is about Setekh, God of Chaos, and Horus, God of the Sky.

"Remember this... Gods are like Tinkerbell, if you don't believe in them, if you don't need them, they fade away. But, because they're gods, they don't die. And if the need returns, so, too, do the objects of belief. Remember this, because it is true."

Kaï-ro is the dark city across the River Isis built by Mr. Nero. He found a god who speaks to and through him. He carries out his Setekh's orders and starts building 3 huge black structures. Well, he himself isn't building them... People from Dinium (the original city on the other side of the Isis) are kidnapped and become slaves of Kaï-ro. Once you're taken to the other side of the crocodile infested river you're never seen again.

With his Dark souldiers (that's how they spell it) and his army of Risen, Mr.Nero pretty much has this 'bring a god back and destroy the world' thing in the bag. But there's one thing he doesn't plan on. Just like Setekh was brought back, so will the god's brother, Horus, by one abandoned lonely boy. Stretch Wilson.

Stretch is a scav. Tons of them crawl over Bloom's Mount, a mountain made up of discarded items nobody wanted, and they search for anything that's valuable. If they don't, well, then they don't get food for the day. On top of that, Bloom's Mount is a terrible place to work. The rubbish could collapse on you or worse, parts of the heap could explode as they always do when the methane gas builds up. Stretch scavenged Bloom's Mount with his dog named Bone. The dog had found Stretch a couple months after his dad was kidnapped for slave labour, and Bone hasn't left his side since. But one event changed Stretch's life forever. He is the only person who can stop the evil that lives in Kaï-ro from taking control, for eternity. How did this boy, this insignificant street-boy who can't read or write, become the one to save them all? You'll just have to read it to find out!

This was a pretty good book. Very original. But it wasn't Special. It didn't grab my attention and pull me in hook,line, and sinker. I liked it but didn't really get into it and enjoy it till about halfway through. I don't get how Jazmin fits into the story. She's an orphan girl who they pay to give them a donkey then she comes with them to Slip-End and all of a sudden they're friends? I also thought that their war was too simple and easily won. I mean sure a lot of people die but they're facing a frickin GOD! A god of CHAOS I might add. War IS chaos! But it was like: *poof* war's over, oh people are dead?Wellll who cares let's go find my dad now! And then that whole thing with the Witch-Lady? Tanith/Phaedra? I did NOT see that coming. AT ALL. Also, while they were all at slip-end trying to get an army for Horus so that they could take down Kaï-ro, I felt like that was just *poof* you have an army *poof* make that TWO armies. And it wasn't very believable.

One thing I really liked was how when the Guild dresses Stretch as a god-on-earth he felt out of place. An imposter. A fake. It made him seem more down to earth like 'Just days ago I was a scav so now the whole "I'm a gods messenger on earth" shabang doesn't feel real'. Even though it IS real. He IS Horus' messenger. The god talks to and through him just like Mr.Nero and Setekh. Anyway, it was an ok book, wouldn't recommend it, but not a bad read. It was a stand alone which was really refreshing after reading so many series lately.
Posted by Nikki Sojkowski at 7:11 PM